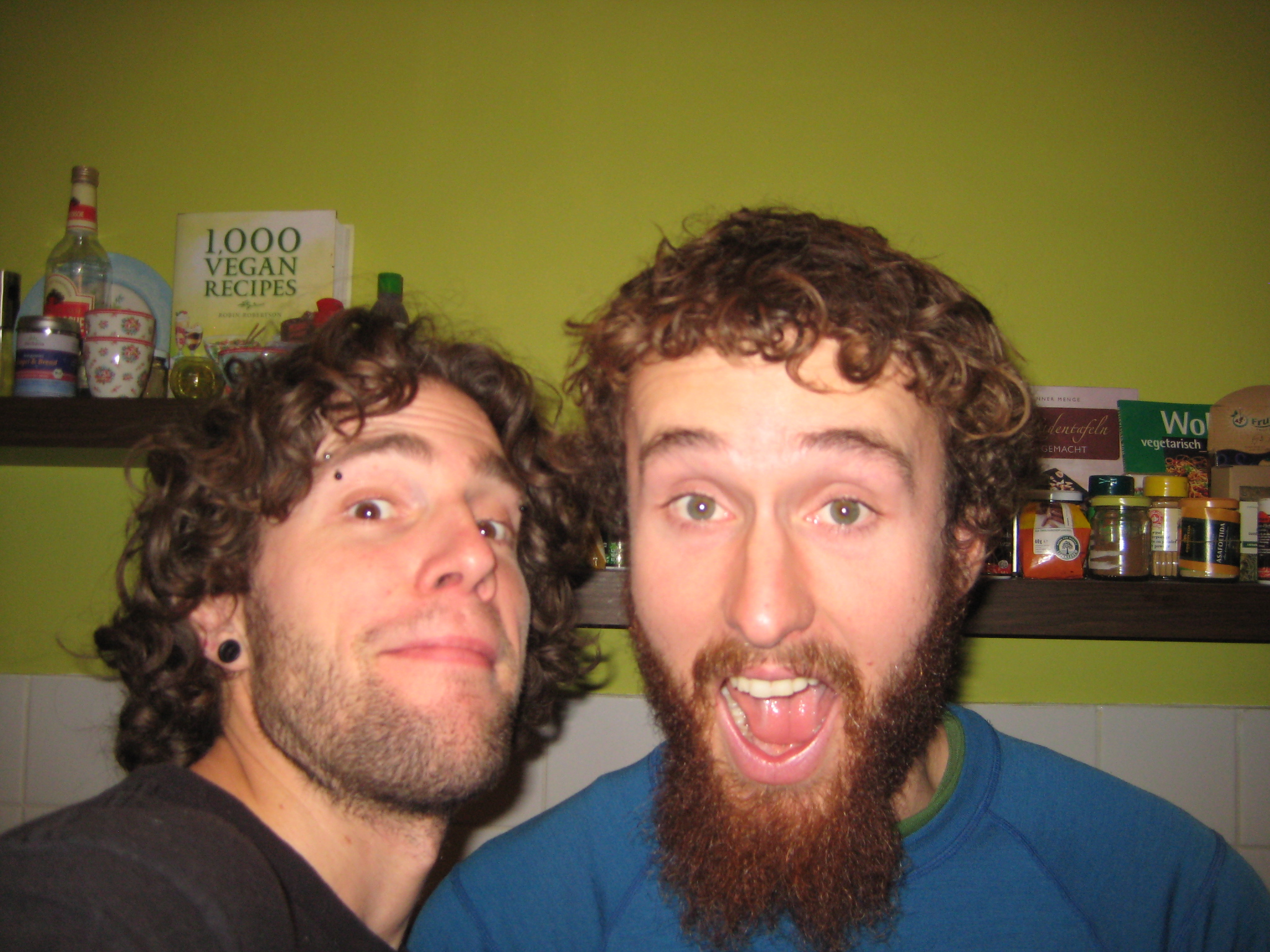 It´s done – the first vegan cultural experience is over and it will be pretty hard to  put into words as it was different from what I expected – part of it at least.

But first let me introduce my vegan guests. I met them on couchsurfing.org. This website is quite new for me but my two canadian cooking guests Justin and Taylor travel all the time which is pretty inspiring for me. I´m lucky if I´ve seen half as many countries sometime. They are best friends for a long time but just met these days face to face for the first time – in Berlin. For me the most amazing thing they told me is – that Justin kind of inspired Taylor to become vegan. I can not imagine a more appropriate choice than those two canadian friends to be my first cooking guests within this challenge.

Okay now comes the cooking part. When I met Justin on couchsurfing he told me, that Canada does not really have any specialties but after he thought about it a while he found some pretty delicious dishes which were quite easy to veganize. So we started to make vegan poutine and s’more cake for dessert.

Taylor and I started to cut the potatoes into fries. After that we put them in a bowl with water.

Justin and my vegan friend Nina prepared the gravy. First they did vegan butter in a pot and melted it, they added the flour and cooked the whole thing

until it was very brown, stirring – that was Justins part, he loved it. 😉 Then he stirred in the prepared stock/gravy and seasoned with salt and pepper. They turned the heat up so that the gravy would thicken. We set it aside and turned to the frying part.

We drained the potatoes and put some… ok very much oil in Ninas favorite pot – that is pretty important for the things which happened next. I suggest you just take a good look at the next picture:

YES! Everything was fine and we were very happy together, delicious smell in the kitchen aso. but suddenly our frying pot started to burn!!!

And you know what the funny thing is as we cooked in Nina´s kitchen? Her flatmate, who was in another city on this day, is a firefighter and even more funny – Justin is one too! 😉

But as noone really knew what to do I called the fire departement to ask how we could put out the fire (and rescue Nina´s favorite pot). But they only asked where Nina lives and after a few minutes we couldn´t believe what we

heared. “Nee-naw nee-naw” or like we say in Germany “tatütata” and – I think Justin counted at least nine – firefighters came out of the fire engine to rescue us and the pot.

They carefully carried the hot pot out to the street and after a long discussion what to do next they decided to put out the flames. The police also came to see our burning pot. It was quite exciting.

After a while we got our pot back, not burning

anymore but destroyed anyway. I´m still very sorry for your “loss” Nina! We decided to make our french fries in the oven instead!!!

It was really, really yummy and I´ll introduce you to the recipe tomorrow as it is half past 2 am  over here already. So be excited for part two of our hot evening which wasn´t half as hot as part one but very nice, inspiring and delicious!