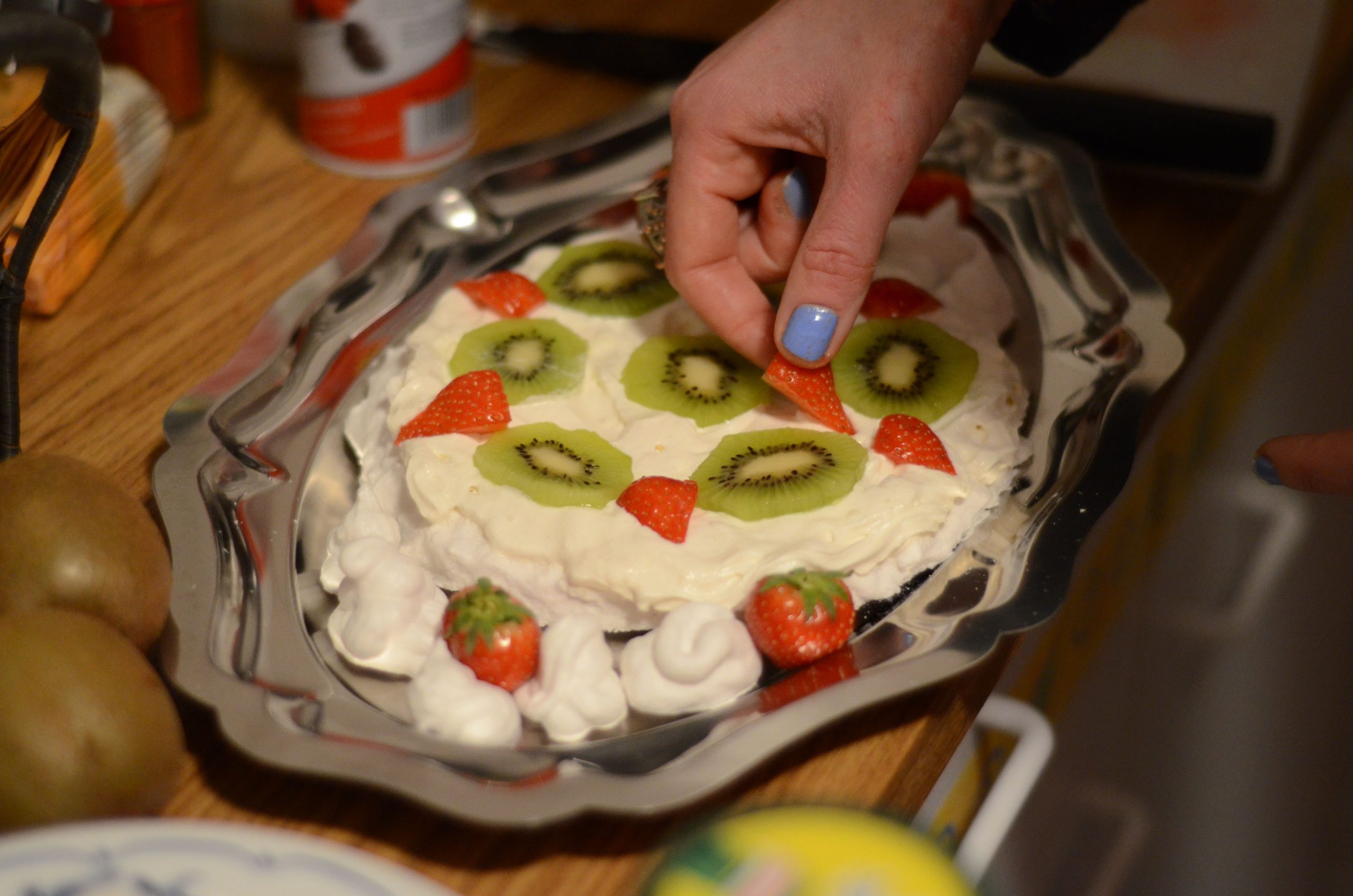 Although the weather in Berlin gets colder and colder these days a few travellers still are coming to Germany to explore my awesome hometown. So did Amy and Georgina from New Zealand. They are on a trip through Europe right now and last week they visited me in Berlin to cook typical vegan dishes from New Zealand.

What we made together was a very delicious curried kumara soup. Kumara is the kiwi-word for sweet potato but the kumaras actually are a little different from other sweet potatoes. Although their taste is pretty similar the kumara is a purplish root vegetable that, when peeled and cooked, is a yellow green color. The curried kumara soup is an easy, creamy soup with coconut milk and just a hint of curry flavor. We had “Maori Fry Bread” to it which was surprisingly good too.

For dessert we made Pavlova which is a delicious creamy meringue cake. There is a long standing debate about whether New Zealand or Australia invented this dessert. So Amy and Georgina were very glad that I didn´t cook with Australians yet! 😉 The name, Pavlova, was chosen in honor of the Russian ballerina, Anna Pavlova, who toured both New Zealand and Australia in 1926.

As merengue is – of course made of eggs – I had to look for a vegan merengue recipe first. There are a lot out there on the internet but I choose that one – which is based on the egg replacer “No Egg” from Orgran. It turned out very, very good. So thanks a lot!! You can find the original recipe (German) here:

Take a big bowl and beat water and egg replacer for 5 minutes. Start adding the sugar, a tablespoon at a time, and continue to beat, on high speed, for another 5 minutes.

Cover a baking tray with baking paper and spread the meringue in shape of a circle, smoothing the edges, making sure the edges of the meringue are slightly higher than the center. You can make one big circle for one big merengue cake or several small ones. The small ones will be easier and quicker to dry.

You also can make some very small nice ones for decoration later.

Put in the oven at 130 degrees for about 2 houres. Check after 2 houres if merengue is dry. Let merengue cool down.

Just before serving gently place the meringue onto a serving plate. Whip the cream and mound it into the center of the meringue. Arrange the fruit randomly, or in a decorative pattern, on top of the cream. Serve immediately.